Kameron Peace is a walking zombie. Her past haunts her every day and her only therapy is a daily diet of vodka. Cameron feels that she has nothing to live for until she runs into an old colleague. This colleague refers Kameron to a therapist so that she can start the healing process. But is she ready for it? Bridget Garrett is trying an unorthodox treatment on her new client Karmeron. But Bridget is still searching for her psychotic husband that disappeared five years ago. When she hires a private investigator to find her husband, she finds the task daunting at best. Through the therapy sessions , Bridget and Kameron get the shock of their lives when a truth is revealed that neither one of them are prepared for.

After a four year hiatus, Monique D.Mensah is back better than ever with Death’s Companion. The two main characters in the book are extremely flawed, human, and likable. Just when you think you’ve figured out the who, what, when, where, and why, Mensah turns everything upside down with her signature plot twist. Readers will be absolutely shocked at the ending that you won’t see coming. Death’s Companion is a perfect psychological thriller by Monique D. Mensah.

Book of the Week : Secrets In Love : AlTonya Washington

Amon Mikende and Patrice Flowers seemed different as night and day. He was a sought after young architect. She was a struggling college student. He was sensuality personified and she was undeniably intrigued. Amon wasn’t thrilled by their ten-year age gap, but he found Patrice impossible to ignore. For a time, she forgot her past. She forgot that in college, there were always back doors that resulted in secrets best kept hidden. Those secrets would haunt her longer than she could ever imagine.

Click here to order your copy of Secrets In Love today!
at November 22, 2016 No comments:

Email ThisBlogThis!Share to TwitterShare to FacebookShare to Pinterest
Labels: Book of the Week, November 2016

Poet of the Month : TL Jones 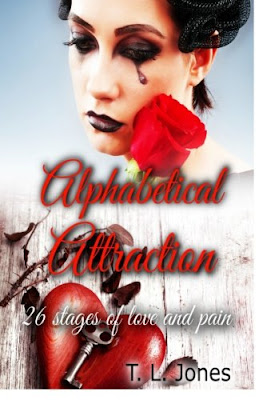 This is not your typical love poetry book. This book explores the depths of a relationship that are often ignored or concealed. All aspects are explored as topics of love and pain and is presented in a raw unadulterated manner. Alphabetical Attractions: 26 stages of love and pain explores love, hate, one night stands, spirituality and much more while spelling it out from letters A to Z. Do you know your alphabet?

For more information on TL Jones and to purchase her books, visit http://www.tljones.co
at November 02, 2016 No comments:

Reverend Curtis Black's "secret son," Dillion Whitfield Black has decided to come back home. The family has decided to let the past be the past, but they distance themselves from Dillion. When Dillon moved back home, he met Raven and soon they were married. Dillion decided to follow in his dad's footsteps and become a Pastor of a mega church. Though the church was not big as his father's church, it still has almost a thousand members.

Alicia was the only child of Curtis Black that reached out to Dillion and to give him some family support. So Alicia decides to join her brother’s congregation. It was hard for Alicia to decide to leave her dad's church. But she had no choice because she knew her family would not accept her husband and forgive him for his past.

But Dillon wasn't the holier than thou Pastor he pretended to be. Dillon is obsessed with the fast life, women, power, and money. Little did Dillion know, Raven had her own agenda and would do anything to make sure she gets everything she wants. Secrets and lies will soon be exposed and no one will trust each other again.

I have read every book in the Curtis Black series and this author has yet to disappoint. I have always enjoyed how Kimberla Lawson Roby uses events that could definitely happen in real life churches. Roby gives just  enough details of every character and it's never excessive. Each chapter flows right into the next. I am always excited to read one of her books, especially the Curtis Black series. I hope you enjoy A Sinful Calling as much as I did.

Click here to order A Sinful Calling today!
at August 16, 2016 No comments:

EXCERPT of the MONTH : Behind Closed Doors 2 : Dana's Story by A.L. Smith

Fear is a defense mechanism that produces a vital
response to emotional and physical danger.

Walking five blocks to and from school through the
dangerous ghetto would have intimidated any twelve year old, but
survival was a way of life and fear was my protection. There were
no immediate signs of danger during my daily journey, but I was
instinctively aware of everything around me and always prepared
to act accordingly. As my classmates sped by me on their colorful
bicycles, I grew excited about the prospect that I might finally get
one of my own for Christmas. My father gave my mom the money
to purchase the bike the previous year, but she used the money to
pay the electric bill—at least, that’s the story she told me. When I
mistakenly allowed her to see my disappointment, I received a
whipping and an hour-long speech about my ungratefulness.
“I feed you, and this is the thanks I get? I don’t hear
anyone else around here complaining and poor-mouthing," she
said.

She looked at my younger sisters and my little brother for
affirmation. I wanted to remind her of the fact that they had little
to complain about since she gave them everything. My point was
valid, but I was smart enough to know that a comment from me on
the topic would result in another lashing.

My sisters didn’t respond to the latest outburst from my
mother because they were accustomed to it. However, I could see
the paralyzing fear on their little faces. At times, the verbal and
physical abuse that I received from my mother had a greater
impact on them than it had on me. As a coping mechanism, I
learned to channel everything to a place that was beyond the realm
of feeling. I no longer responded to the physical pain that my
mother inflicted and it drove her crazy. The verbal abuse escalated
a few notches when she realized it had a greater effect on me than
her physical punishments.

This was my life for as long as I could remember, but the
intensity of the abuse dramatically increased when my parents
separated. I was around eight years old at the time. When I got
home from school that evening, I met my father at the front door.
When I noticed the suitcases and plastic bags, my heart sank. I
asked him if he was leaving for good and he said yes. My mother
came out of the house in a violent rage, which worsened at the
sight of my tears. Her eyes narrowed and she spoke to me through
clenched teeth.

“Why don’t you get your shit and go with your daddy!
That’s one less mouth for me to feed. I mean it, Bernard. Take that
little hussy with you!"
She spoke as if her words were meant for a perfect
stranger instead of her own daughter.

My father dropped his bags and knelt in front of me,
without so much as even a glance toward my mother. He gave me
a hug and cradled my face between his hands.

“I love you, Dana. Don’t ever forget that," he said softly.
He gave me a hug and a kiss on the forehead, then turned
to look at my mother for the last time. He spoke in Haitian Creole
or “patois” to my mother, who was from South Louisiana. It was
something my father often did to conceal his anger from me or
whenever he wanted to discuss sensitive information with my
mother. By now, I not only understood the language, but I spoke it
fluently. Neither of my parents were aware of this. In his thick
Haitian accent, he addressed my mother very calmly, but his anger
was apparent.

“You’re going to burn in hell for your evil ways, Diana,"
he said.
“I’ll be waiting for you when you get there,” she replied.
An evil smile crossed her face before she turned and
walked back into the house.


My father left that day and my entire world crumbled.

For more information about A.L. Smith and her novels, visit  www.alsmithbooks.com

Email ThisBlogThis!Share to TwitterShare to FacebookShare to Pinterest
Labels: Excerpt of the Month, January 2016

Building Online Relationships by LaShaunda C. Hoffman is the most comprehensive guide for online promotions on the market today. Hoffman gives writers step by step tips on how to successfully promote your book online while continuing to focus on the primary goal of writing. There is a wealth of information including how to successfully do a blog tour, how to create an online promotional budget, and figuring out who your reader is. Hoffman also includes schedules and worksheets to help the writer to achieve specific goals on a daily, weekly, monthly, and yearly basis. This book is not something to be read in one sitting. The book is meant to be read in stages so that you can complete the worksheets and calendars according to the different goals you're trying to reach. One of the many stand out tips of this book is to not become a "drive by" author in different social media groups and forums. Many writers need to definitely take heed of this advice. Building Online Relationships provides excellent information not only for writers but other literary professionals can benefit from some of these tips as well.

Click here to order your copy of Building Online Relationships today!
at January 06, 2016 No comments:

Keith and Celine Richardson have been married for twelve years with a little girl named Kassie. But lately, their home has not been the "happily ever after" that it used to be. With Celine's business, Kassie, and her best friend Lauren, Celine has not made time for her husband. With the constant arguments and Keith coming in at all times of the night and early morning, their marriage is crumbling.

To make matters worse, Celine has found out that she has cancer. So now she has to deal with her failing marriage, take care of her daughter, and her cancer treatments. She is now wondering if she's going to have to weather this storm alone. Soon she realizes that she does have a great support team and it comes in the form of her very best friend Lauren. Celine and Lauren have been inseparable since childhood. She finally decides to tell her best friend about her health and the health of her marriage. Is it too late for her friend to give her the support that she needs?

What can I say about Best Friends Forever by Kimberla Lawson Roby?  I have never been disappointed with one of her novels. This is a short read, but it's a good one. It doesn't jump all over the place. It stays on track with how Celine and Keith's marriage started to go down hill. I have always loved how the author incorporates God in her books. It's never too much or too little. It’s always straight to the point and you know that no matter what your circumstances are God is always in control! Trust me, there are some twist and turns throughout the book that you will not expect. Best Friends Forever is a short novel but a good one. I highly recommend this book.

4 out of 5 books Reparations : Style + Soul is a beautiful coffee table book by James R. Sanders. What’s interesting about this book is the ...