On the Line with Radiah Hubbert : K’wan 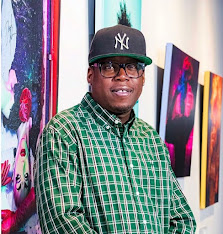 K’WAN is the best-selling, award-winning author of more thirty novels, including the wildly popular Animal series, Black Lotus, Gangsta, Road Dawgz, Street Dreams, Hoodlum, and Section 8. He has been featured in Vibe, King, Entertainment Weekly, and Time magazine. K’wan was the recipient of the 2012 and 2013 Street Lit Book Award Medals (SLBAM) in adult fiction for Eviction Notice and Animal. His credits also include featured commentary in the documentary Iceberg Slim: Portrait of a Pimp (produced by Ice-T) as well as a recurring role as an analyst on TV One’s Celebrity Crime Files. K’wan resides in New Jersey, where he spends his time writing, cooking, and binge-watching reruns of The Vampire Diaries with his teenage daughters. Black Lotus 2: The Vow is his latest novel.

Radiah:  Tell us about Black Lotus 2 : The Vow.

K’wan:  Black Lotus 2 picks up a few months after the events in Black Lotus, and right before Kahllah’s character is introduced into the Animal timeline (Animal 2). Our war hardened heroine has decided she’s had enough of living life on the edge and wants to retire and sample the fruits of normalcy. She’s been serving the Brotherhood of Blood since she was a child, and it’s starting to wear on her. She just wants to focus on her magazine “Real Talk” and maybe find a nice guy to settle down with. For a while, it seems like she may have finally gotten out of the game… that’s when a cop turns up dead and her signature calling card is found at the scene; a Black Lotus flower.

She hasn’t committed this particular murder, but it’s going to be near impossible to prove it to the police; especially her one time rival now turned friend, Detective James Wolf. She becomes a hunted woman and the only way to clear her name is by finding the real killer, which proves to be easier said than done. The person behind the murders isn’t your run of the mill hit man. All signs to point to this being the work of a fellow Brotherhood member, but which one is the question

Radiah: Why did you decide to do a sequel to Black Lotus after so many years?

K’wan : I’d  always planned on writing more Black Lotus stories. She and the Brotherhood are some of my favorite characters to write about. The reason the follow up took so long was because I had so much other stuff that I needed to get out. I think I released maybe seven or eight other stories between the first and second Black Lotus titles.

Radiah: Will there be a third installment of  Black Lotus?

K’wan: Yes...kind of. There are so many rich characters in that world. Some of the characters the readers have met and others they haven’t.

Radiah: Do you prefer to write stand alone novels or novels that are a part of a series and why?

K’wan: That all depends. At the beginning of my career I refused to write sequels. All of my early works were standalone until the Hood Rat series. Even with those, it wasn’t actually a series but several stand alone novels with overlapping characters. I think standalone vs series all depends on where my head is at the time. In other cases I’ve found that sometimes there’s too much for me to say in a single story.

Radiah: Can you give us a sneak peek at what you’re working on now?

K’wan:  I’m finishing up “The Reluctant King,” “Broken Promise,” and of course gearing up to release Animal 5. In addition I’ve gotten back working on my paranormal stuff.I am doing ALOT right now.

Radiah: If a reader just discovered your books, which book would you recommend that they start with and why?

K’wan:  I always tell readers to start at the beginning with “Gangsta.” Of course, everybody loves Animal, but it was Lou-Loc who started it all.

Radiah : Where can readers find out more about you and your novels?

K’wan: I’m working on revamping my website Kwanwrites.com, which seems like its taking forever. Readers can also find me on my social media : Instagram: Kwan_Iamlegend, Twitter: KwanTheWriter and facebook. My personal page is Kwan Writes and my author page is Kwan The Writer. If all else fails, google me and my wiki page will probably pop up.

Email ThisBlogThis!Share to TwitterShare to FacebookShare to Pinterest
Labels: November 2020, On The Line With Radiah Hubbert 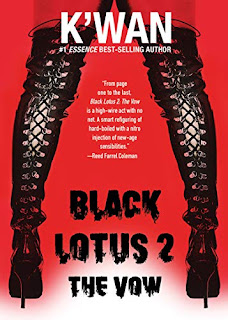 Kahllah has retired from the Brotherhood of Blood and is trying to live a normal life. Her focus is on her magazine “Real Talk” and a possible love interest. But the simple life that Kahllah craved for is interrupted when a cop ends up dead. The killer left her signature  Black Lotus flower at the scene of the crime. Now, Kahllah must find out who is killing in her name before it’s too late.

Murder, chaos, and disorder is what you’ll find in Black Lotus 2 : The Vow by K’wan. Just when you think you have the story all figured out, K’wan throws in one of his infamous curveballs that will shock you. K’wan does a good job of giving readers more of a peak into Kahllah’s background with the Brotherhood of Blood and how they operate. You could read this book as a stand-alone but you would be cheating yourself if you skipped Black Lotus which is the first installment of this series. Black Lotus 2 : The Vow is full of the cinematic action and drama that K’wan is known for. Readers will be anxiously waiting for the next installment.

Get your copy of Black Lotus 2 : The Vow today!