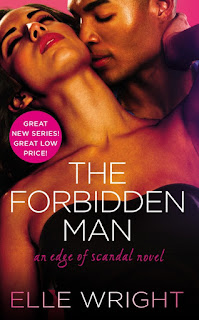 THE FORBIDDEN MAN by Elle Wright (July 28, 2015; Forever Mass Market; The Edge of Scandal #1)
In Love With the Wrong Man
Sydney Williams has forgiven her fiancé, Den, more times than she can count. But his latest betrayal just days before their wedding is too big to ignore. Shocking her friends and family, she calls off the engagement. She walks out on Den . . . and into the arms of his brother, Morgan.
Known as a player, Morgan Smith has secretly spent years fighting his feelings for Sydney. When Den's latest dirty deed leaves Sydney devastated, Morgan can't stop himself from coming to her rescue. What begins as friendship quickly escalates into all-consuming passion. Despite their intense connection, Sydney would rather deny her desire than come between brothers. But as Morgan is determined to make Sydney his, Den won't give her up without a fight . . .

Born and raised in Southeast Michigan near Ann Arbor, Elle learned the importance of reading from her mother. It was also her mother who, later on in her life, gave Elle her first romance novel: Indigo by Beverly Jenkins. From that moment on, Elle became a fan of Ms. Jenkins for life and a lover of all things romance. An old journal she wrote back in college became her first book (which she still wants to publish one day).


Click here for your chance to win a free copy of The Forbidden Man!


Click here to read the excerpt of The Forbidden Man

Janice Johnson is living her worst nightmare. Her young black son has been murdered and no arrest has been made. Janice wants to trust the justice system to do the right thing but that’s easier said than done. To further complicate matters, Janice’s brother-in-law wants to get his militant style group involved which she doesn’t approve of. Meredith Spencer’s husband is the person accused of the murder. She knows what really happened that night and feels conflicted. Does she do the right thing and tell the truth or does she stand by her man?

Stand Your Ground is the most prolific novel by Victoria Christopher Murray to date. Murray does an excellent job of bringing this controversial law to the forefront. The interesting part of this story is that you see all sides of this. You see not only Janice’s side of dealing with the murder of her son but you also see Meredith struggling with doing the right thing. Murray gives readers a front row seat to the dirty tricks that are used in order to sway pubic opinion and the jury about this case. This story would not be complete without Murray giving us a very satisfying and shocking conclusion. Stand Your Ground is great discussion book and another winner by Victoria Christopher Murray.

One tragic incident can change a life forever. This is what happened to Jamal Jones. Jamal records a scuffle with a white police officer on his cellphone that leads to the officer’s death. Facing murder charges, Jamal is now on the run. Jamal’s mother Gloria will do anything to protect her son. She knows that her son couldn't possibly be the cold blooded murderer that everyone is saying he is. When she finds her son, Gloria has to decide if she should turn him in or help him run. Kay Christiansen is a prosecutor and Houston mayoral candidate that can’t wait to put Jamal behind bars. But when her past comes back to haunt her, Kay has to worry about more than her case.

Mama’s Boy is a stunning novel by ReShonda Tate Billingsley. This emotionally charged story shows how strong a mother’s love is and decisions that she has to make in order to protect her child. Billingsley’s signature character development and shocking plot twists makes this a joy to read. Just when you think you have it all figured out, she drops another secret or lie on you. Mama’s Boy is the perfect book club selection because it would foster a lively discussion. Once again, ReShonda Tate Billingsley produced another heart wrenching and entertaining tale with Mama’s Boy.