Book of the Week : Banking On Love : Iris Bolling 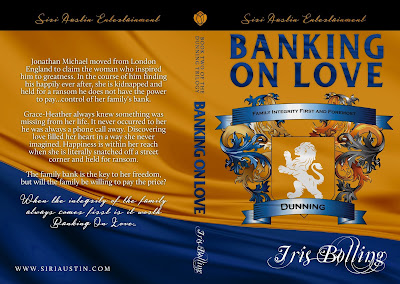 
Mission confirmed.
Secure the building with maximum coverage to ensure our man enters and leaves still breathing.
“Man one, confirm you have target in sight.”
“Man one, target in bull’s eye.”
“Roger that. Man two, confirm location.”
“Man two, left of back door. If it opens their ass is mine.”
“Copy that. Man three, confirm second target in sight.”
“Man three, target two in sight, front window covered.”
“Copy that. We are a go.”
The black SUV pulled around the corner with two occupants. Myles Dunning and Jerome Morgan. “Anything goes off script you hit the ground. I will cover the room.”
“This is a meeting, Jerome,” Myles stated. “We are not here to kill anyone.”
“Then I suggest they make no wrongs moves,” Jerome stated as he parked the vehicle. Another black SUV pulled in front of them and parked. Jerome stepped out on the driver’s side of the vehicle. He watched as another vehicle parked behind them. Jerome scanned the area as he walked around the vehicle to the passenger door. Satisfied with what he saw, he opened the door, allowing Myles to step out.
“You are clear to walk in,” Michael Dunning’s voice came through the earwig Jerome was wearing. “Infra-scan shows two bodies and the boss is inside.”
Jerome gave a slight nod. “Say what you have to say then we leave. Clear.”
Myles nodded. “Clear.”
It would be a lie if Myles said his nerves were not on edge. Dealing with the mob was not something he ever imagined he would have to do. Yet, he was here about to confront the man who was threatening to infiltrate his bank. No one gets to control the bank but a Dunning. His father did not allow it, and neither would he.
He stood back as Jerome opened the door then stepped inside. Myles followed.
On the front of the building was the name Pavel & Sons Real Estate. The man he was meeting, Nikolai Pavlovsky, was the head of the Russian mob on the east coast. He had called ahead requesting the meeting, so they were expected. He decided, when this meeting was over, he was going to kill Walker Dunning Jr. with his bare hands. It was his stupidity that had them in this position.
Inside, the building looked like any other real estate office. Pictures of available properties were on the wall. Desks with files, computers, laptops and office supplies on top lined each side of the room. Since it was a midnight meeting, the place was empty of any employees. To their knowledge, there were three people other than them in the building. Pavlovsky and two body men.
“Mr. Dunning,” a man from the back of the office called out. “Mr. Pavlovsky will see you now.” He held a door open that led to a back office.
“I need to check that room before my man goes inside,” Jerome stated.
The man frowned. “That would be an insult to the boss.”
“Jerome,” Myles interceded. “I am good.” He walked to the room.
At a large antique desk, a gentleman with dark hair, in his early or mid-fifties looked up as he walked in. Myles wasn’t sure what to expect, but he anticipated the person would be an older man, with a bald head and dangerous looking eyes. This man looked like any businessman Myles would be sitting across the table from on any given day. Nothing about the man screamed dangerous or sinister, yet Myles knew the man was not to be underestimated.
“Mr. Pavlovsky.” He extended his hand. “My name is Myles Dunning. Thank you for seeing me on short notice. May I?” Myles pointed to the seat.
Nikolai nodded his head. “Please.”
“Thank you.” Myles took the seat in front of the desk. “My father was Hepburn Dunning, CEO of Dunning Bank and Trust. A few months ago he was murdered. I was voted in to head my organization. As the head of an organization when someone threatens my territory I have two choices. Stand my ground or give in. The moment I give in, I am no longer in control of my organization.”
Pavlovsky held up his hand. “Pauley, would you and our visitor step inside the room.”
Myles watched as the man he called Pauley and Jerome walked in. Pavlovsky pushed a button under his desk.
Jerome seemed to immediately know what was happening. “We are sealed,” he said into his earwig.
Pavlovsky nodded with a smirk. “We may now speak freely.” He looked at Jerome. “Government trained?” he questioned.
Jerome gave a slight nod.
“Mercenary?” Pavlovsky asked.
“Worse.” Jerome responded with a glared at Pavlovsky.
“Loyalist.” Pavlovsky smiled then glanced at Myles. “I’m impressed, Mr. Dunning. How many men do you have surrounding us?”
“Enough to ensure I leave here breathing.”
Pavlovsky nodded. “Please continue.”
Myles continued. “It has come to my attention that Stephen Pavel, a man I am told is under your authority, is attempting to take control of my organization. I cannot allow that to happen. Out of respect, I’ve come to you to resolve this situation.”
Pavlovsky sat forward. “Mr. Dunning, my condolences on the death of your father. I admired the way he took care of his community and his leadership abilities.” He smiled. “The fact that you brought this situation.”

Get your copy of Banking On Love Today!

Email ThisBlogThis!Share to TwitterShare to FacebookShare to Pinterest
Labels: Book of the Week, June 2019