James Pruitt had no questions about being adopted. His bond with his parents was tight, and he never felt the need to search for his biological mother and father. He realized early on how lucky he was to even have parents like William and Mamie Pruitt. However, on his death bed, James' father used his last breathe to tell James that he loved him but what came next set the tone for the entire book: “have…brother, help him.” The author didn't put much into this scene; you could almost pass right by it. James has much more on his mind at this time then to realize the magnitude of what his father has just said.

While going through his dad’s things, James finds a box filled with newspaper clipping, photos and several different articles, all about Warren Johnson...the same Warren Johnson that was in the newspaper on Friday, the same paper James never had a chance to read. After pondering about the box, James comes to one conclusion; his father has a love child.

Out of respect for his mother, he tries to hide the box but she asked for it. James tries to deter her by saying he already went through the box and “it’s nothing.” But his mother is standing waiting for James to turn the box over to her, and he does. Mom tells James that she knows about the box and who the young man in the paper is. She tells him it’s his half brother by his biological mother. Shocked, James asks “"you know who my mother is?" Very soon after this conversation, James is told some information that will be the catalyst for his actions throughout the next hundred pages or so.

Color of Justice is my second book that I've read by Pridgen. Hidden Secrets Hidden Lives was my first and both books proved to be very satisfying reads for this reader. His storytelling skills are direct and to the point. It doesn’t matter whether he is portraying a corporate or human issue, your heart will be engaged. This time my heart was lost in this story and as it came to a bitter sweet end, the emotions from James and his family and friends left me wondering how far would I go for family?

If I was a weather person I would tell you there’s a chance of rain take your umbrella with you today. As a reviewer I’m telling you to read this book because it is filled with the food needed that makes a good story.

Reviewed by Missy For Urban Reviews

Order your copy of Color of Justice today!

Win a physical copy of The Violet Rose by Charmyra E. Fleming. Email your name & address to: violet@urban-reviews.com by 8pm (cst) 9/2... 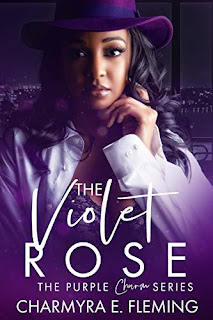