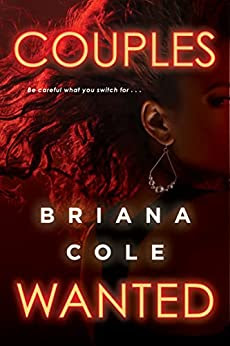 4 out of 5 books
The follow up to The Marriage Pass, COUPLES WANTED focuses on Bridget and Roman who have a very successful marriage that they want to keep exciting. This all changes when they meet swingers, Corinne and Patrick. Patrick is instantly obsessed with Bridget and encourages Corinne to entice the other couple into joining in their lifestyle. Bridget and Roman are intrigued as well but need more time to get onboard. As the old saying goes, "curiosity killed the cat", it holds true when Bridget and Roman advance down the slippery slope.
Corrine and Patrick pursue the couple with Corrine attending events where she knows she will run into Bridget.  She even gets Bridget booked to work an event for the Shadow Lounge, the club that sponsors the swinger events.  After the first event she attends with Patrick, they are all in.  The consequence of that decision starts Roman’s obsession with Corrine. Corinne's long held secret is revealed and explodes on both couples’ relationship.
Briana Cole has done it again. Relationship drama is her specialty, and she engages the readers to keep the pages flipping. We even see an appearance from Dorian from A Marriage Pass. Wow, what a ride.

Get your copy of Couples Wanted today!

5 out of 5 books Aya de León slayed the story of Queen of Urban Prophecy. From the first word, Aya took me back to the eighties and nineti...