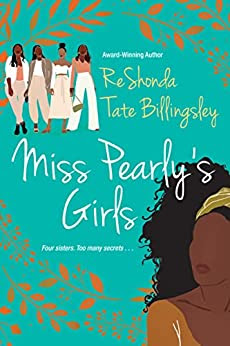 4 out of 5 books
As a resident of Arkansas and a fan of Reshonda Tate Billingsley, I had to grab MISS PEARLY'S GIRLS. The story centers around Pearly Bell's four daughters, Maxine, twins Stella and Star and the youngest Leslie.  Upon graduating, Stella, Star and Leslie fled Smackover Arkansas for better lives, leaving behind a bed of secrets that only Mama Pearly knew about.  When a health crisis lands Mama Pearly in the hospital, all the girls return home, some for the first time since leaving.  Mama Pearly's dying wish is that each daughter reveals the secret she has been keeping.  It's a tall task for the sisters, but they cannot deny her wish.
Maxine is the oldest daughter who remained in Smackover with her mom.  She’s the wife of a local Pastor and harbor resentment towards her sisters for leaving home and leaving her to ensure their mother will be okay.  Stella is a publicist for the Atlanta Falcons.  She has always had big dreams of leaving Smackover for a more lucrative and glamorous life.  She never saw herself ever stepping foot in a town like Smackover again in her life.  Stella’s twin sister, Star is married with children and is content being a homemaker. She did not pursue a formal education but chose love instead.  Leslie is the youngest of the girls.  She has always felt like the odd man out, as her looks was so different from her siblings and the resentment shown towards her by Maxine.  As each sister expose her secret, the revelation will tear down their already fragile relationships, yet allow opportunity to strengthen and rebuild them.
Reshonda Tate Billingsley never fails to deliver.  She is an awesome storyteller who managed to combine heavy subject matter with a bit of humor and a lot of love.  I highly recommend MISS PEARLY’S GIRLS.
Reviewed by Paula Allen
Get your copy of Miss Pearly's Girl today!
at July 21, 2022

5 out of 5 books Aya de León slayed the story of Queen of Urban Prophecy. From the first word, Aya took me back to the eighties and nineti...