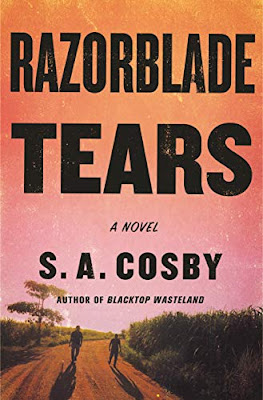 5 out of 5 books
RAZORBLADE TEARS is awesome.  Isaiah and Derek, an interracial same sex couple are brutally murdered outside their home. The motive for the crime is unknown and the police have no leads.  Their fathers, Ike “Riot” Randolph and Buddy Lee Jenkins set out together to avenge their son’s deaths.
Both dads have formally been incarcerated and missed out the formative years of their son’s lives.  Also, both have strained relationships with their sons because of their sexual orientation.  The devastating loss of their sons releases a level of guilt and love that they held in their hearts which propelled them to stop at nothing to find the killers.  Their personal investigation led them through interactions with a dangerous bike gang, hip hop artists and political figures.  The pair leave a path of destruction on their quest to right their wrongs for the love of their boys.
I can easily see RAZORBLADE TEARS being made into a blockbuster movie.  The plot was well written and driven by all the action and suspense.  Buddy Lee’s character was hysterical and endearing.
Reviewed by Paula Allen
Order your copy of Razorblade Tears today!
at May 11, 2022