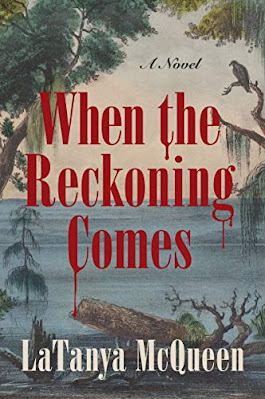 3.5 out of 5 books
Childhood friends, Mira, Celine and Jesse grew up in the segregated town of Kipsen. Celine was seen as an outcast since she’s white and her two friends are black.  One day on a dare, Mira and Jesse set out to find the infamous Woodsman Plantation, a place where it is rumored that the spirit of slaves dwelled.  A tragic event occurs that day where Mira is face to face with the undead and Jesse is attacked and accused of murdering a white man.  The dynamic of their friendship are never the same after that day. Celine who declined to participate in the dare, separates herself from Mira and Jesse and Mira’s refusal to admit what she saw and heard that day, break Jesse’s trust in her.
Ten years later, Mira is headed back to Kipsen to attend Celine’s wedding which is being held at the newly renovated plantation which is now a resort.  Although it is now a resort, the venue is a modern-day reenactment of the times of slavery with black workers dutifully serving whites who show no gratitude or attention to them as humans.  There are also performances where you can see the slaves plow the fields and clean linen outside while singing haunting melodies. Through conversations with the workers, Mira discovers the day of reckoning when there will be a spiritual uprising dead slaves will take place the weekend of Celine’s wedding. She must try all that she can to stop the bloody vengeance on the descendants of the former slave owners.
The build up of the storyline for WHEN THE RECKONING COMES starts strong, but it gets muddled near the end with scenes that I wasn’t sure were actually occurring or parts of the characters imagination.  Outside of the guests fleeing the wedding venue, I am confused about what happened that weekend.  I love the supernatural elements of the book and it is well-written, but the plot needed more development. I also would have liked to have seen more interaction with Mira and Jesse in reconciling the events of that fateful day from their past.
Reviewed by Paula Allen
Order your copy of When the Reckoning Comes today!
at May 11, 2022