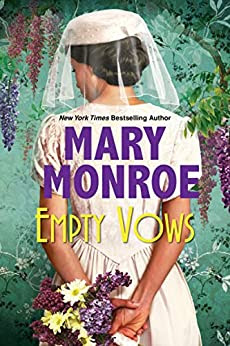 EMPTY VOWS, the sequel to MRS. WIGGINS pales in comparison with the first book in the series. The pace was slow and there were few surprising, dramatic scenes which is the norm for author Mary Monroe.  The novel picks up where the previous book ended with the characters in Lexington, Alabama attending Maggie and Claude's funeral.  Claude becomes the most sought after bachelor in their small town with numerous women vying for his attention.  He has no interest in any of them but wanted to find a nice lady to settle down with so as to not cast suspicion on his lifestyle.  Maggie's best friend Jessie and Blondeen, who has a checkered past, are the top contenders for his affection.  Claude's choice will bring drama directly to his bedroom.  During this time, there was a serial killer who was killing black women on the loose. There is very little development with that story line and it was left hanging at the end.

I was disappointed that EMPTY VOWS did not deliver the same page flipping action as MRS. WIGGINS.  It seems as though the story wasn't sure which direction it wanted to go and it was rushed.