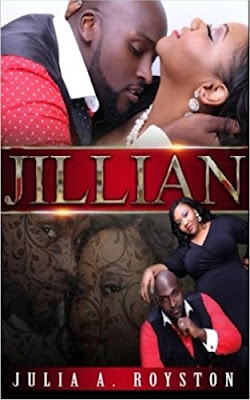 Jillian is the grown and sexy romance by Julia A. Royston that you didn’t know you needed.  Jillian Forrester, owner of a research information company has everything in life she needs except for her happily ever after.  After several failed relationships and trying to maintain her standards as a Christian single, the pool of potential suitors appears to be non-existent.  Her good friend and office manager, Patricia, who has worked and helped her build her company from her living room to an office in downtown Cincinnati, understands and supports Jillian’s desire to be wed.  She also wants the same for herself, but while she is actively dating a pool of men; Jillian resolves to patiently wait for the man that God has for her.

Having landed a big corporate account, Jillian discovers she must enhance her company’s security and infrastructure servers.  She contacts one of the top technology companies to handle the job.  To her surprise, the owners of the company are twin brothers, Byron and Myron Randolph, childhood friends from their association at church conventions.  When the Randolph brothers meet with Jillian to discuss the services they can provide for Forrester Information Management, the chemistry between Byron and Jillian is instant and magnetic.  From that day, Byron made it his mission to pursue the woman he had a crush on since childhood.  Jillian has to overcome low self-esteem and hurtful relationships from the past to learn to release her heart and embrace happiness.

Jillian seemingly starts as your standard romance as the plot flows down the happy path for over half of the novel.  But when a blast from the past enters the story, the drama is introduced and is very compelling.  My only regret is that it was not brought into the storyline earlier to add more suspense and spice to the plot.  The climatic ending is jaw dropping!

Get your copy of Jillian today!