INSIDE OUT WITH ROLAND S. JEFFERSON - AUTHOR OF 'WHITE COAT FEVER' 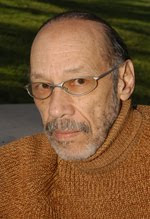 Born in Washington DC, Roland Jefferson was raised in Los Angeles. In 1976 he tried his hand at writing fiction. His first novel, The School On 103rd Street was published to critical success, taking its place along side the works of acclaimed authors Sam Greenlee and John Williams. It has been published three different times in the US and simultaneously published in Germany, while garnishing numerous awards and accolades including its selection by the Los Angeles Times Book Review for inclusion in its 'Guide to Literary Los Angeles 2001.'


Urban Reviews:  Tell our readers about White Coat Fever.
Roland S. Jefferson:  Well, White Coat Fever is a romantic melodrama that takes place in the 1960's on a HBCU campus during the explosive civil rights era. It centers on distorted values during a time in African American society when college-age girls were socially mandated by their families to maintain their middle-class status by marrying doctors...by any means necessary----even if it meant they didn't love them. It follows three childhood friends as they matriculate through college & medical school, their loves & disappointments all shaped by the unfolding civil rights movement that draws them into an irrversible conflict with class, color and ideals of romantic entitlement that changes them in profound ways they never anticipated.

Urban Reviews:  How did the idea for this book come about?
Roland S. Jefferson:  I'd always had the idea for this story largely because I lived it. For the past 40 or so years my family has constantly been on my back to write it, so I finally did. I guess they saw a social and relevance that I didn't, probably because I was too close to it. But once I started writing it, I could finally see they maybe had a point, that this story was rooted in traditional African American middle-class history (be that good or bad).

Urban Reviews: You have a few other released titles as well. Briefly tell us about your other published works.
Roland S. Jefferson:  I've written a total of six novels, five of which are in print. The first, SCHOOL ON 103RD STREET

continues be the most successful, in that it is being taught in black literature courses on the college level. It's revolutionary theme still resonates some 35 years later. But it too was rooted in the civil rights movement. A CARD FOR THE PLAYERS

is about a unique Las Vegas casino heist carried out by a group wealthy gambling addicts. My third book 559 TO DAMASCUS

is centered on a group of Islamic terrorists who get their hands on a nuclear bomb. DAMAGED GOODS

is a crime noir novel about a group of African American criminals who pull of a daring heist at the behest of a corrupt prison warden promising a reduced sentence. ONE NIGHT STAND

is a story about a brilliant young female attorney who works for the PD's office (public defender). But she has personal demons that place her in harms way when she's assigned to defend a black gangbanger/drug dealer falsely accused of murder by a group of corrupt LAPD cops.

Urban Reviews: What things about the book industry have taken you by surprise?
Roland S. Jefferson:  The explosion of urban literature (street lit)

Urban Reviews: What has been your best experience so far as a published author?
Roland S. Jefferson:  Getting positive feedback from black female readers.

Urban Reviews: Who or what inspired you to want to become a writer?
Roland S. Jefferson:  No one in particular. As a youngster I always had a penchant for adventure stories and wanted to write. But the family discouraged that career choice, thinking it would not be a profession that could sustain itself. At that time, in the 1950's there weren't but a few black writers who'd broken through to celebrity stastus. So to some degree I suppose they were right, because they only wanted the best for me. So in later years I had to discover my writing talent on my own.

Urban Reviews: Do you have any ideas or plans for any upcoming projects?
Roland S. Jefferson:  Yes, I'm working on a serial killer book now. Many readers have suggsted a sequel to WHITE COAT FEVER

Urban Reviews: What do you like to do besides write?
Roland S. Jefferson:  I like to drive fast cars. I love vacationing and writing in the caribbean, especially the Bahamas and Jamaica. I'm a fan of classic film noir and good jazz. And I'm also a long time collector of Dorothy Dandridge memorabilia.

Urban Reviews: What things can you suggest to other writers that are thinking about self-publishing their novel?
Roland S. Jefferson:  Writing the novel is easy. Enjoy that part of it. Because once it's finished and edited, the work really begins. The biggest obstacle you will face is the expense and time required in getting the book publicized, distributed and into bookstores as well as getting it reviewed. As a general rule most of the nation's major newspapers and magazines flatly refuse to review self-published books. You can get some TV exposure on public access programs, but you really want to be on CNN and CNBC. And chain bookstores have to be hauled kicking and screaming to the table in order to get them to give up shelf space for a self published book. Of couse the internet is changing all of that, but there is still a great deal of marketing and promotional expense necessary to push a book into the public eye. Keep in mind you are up against 200,000 other books that come out every year, so you have your work cut out for you in an effort to stand out from the crowd. E. Lynn Harris, Relentless Arron and Nikki Turner are examples of self published authors who used creative and unrelenting drive that paid off and resulted in major book deals and/or theit own book imprints.

Urban Reviews:  Is there anything else you would like to share about yourself or your novel?
Roland S. Jefferson:  Just that it's a book with lots of romance, some explosive historical facts that will make some readers squeamish, and a theme guaranteed to make some black women uncomfortable. It wasn't written with that in mind of course. But then I was there...

Email ThisBlogThis!Share to TwitterShare to FacebookShare to Pinterest
Labels: February 2010, Inside Out, Q and A, Roland S. Jefferson